Our next working bee is to be held on Sunday April 3rd from 9am till 12pm (note this is a changed date to the original due to Easter). We will undertaking the very important task of removing old plastic plant guards from previous plantings on the north side of the creek starting at the new access bridge over the creek to Shirley Park Estate and heading downstream. A good turnout would enable us to move into other areas on the same day.

Location. Five Mile Creek Reserve which is accessible from the Southern end of Tennyson St. Look for the working bee signs near the bike track.

What to bring? A pocket knife or stanley knife, long pants and long sleeves, boots, spare chaff bags or similar
The Landcare tool trailer will be onsite and morning tea will be provided.
RSVPs to Krista on 5427 2140 or woodendlandcare@gmail.com. Newcomers are always welcome.

Doug Delgeish has been working quietly behind the scenes preparing our site for the 2016 Trees For mum planting. Thanks Doug!

Trees for Mum is a part of a national series of Mother’s Day tree-planting events hosted by Landcare. This year’s events will be held on Sunday 8 May. In Woodend, we’ll be planting trees and shrubs for mums at the Woodend Children’s Park. Save the date and come and plant with your mum or for your mum.

Our working bee on the 24th of April will be dedicated to preparing the site in readiness for the big day. We’ll provide more details about this in April.

Our Big Weekend in February

The last weekend of February was a big one for Woodend Landcare.

On Saturday the 27th of February, we were thrilled to be on display at the Macedon Ranges Sustainability Festival alongside several of our fellow local Landcare groups. Many interesting and inspiring conversations about our local environment were had on the day. Meanwhile, the kids enjoyed puppet play in ‘the stump’ which was highlighting the importance of hollows for homes for many of our native critters.

The following day we had a great crew gather for our Willow Attack Working Bee. Willow regrowth at the Tennyson St site was treated, as was about a fifth of the willows growing in the weir. We’re now looking into how to get through the remaining four-fifths! Thanks heaps for joining us everyone – it was a testimate to the old saying ‘many hands make light work’. Special thanks to Jo and Susan for the tasty morning tea and to David for his great on-site guidance.

Puppet play with ‘the stump’ at the Macedon ranges Sustainability Festival

The Upper Campaspe Landcare Network recently received a Victorian Landcare grant to assist in developing long term action plans for landscape restoration along two natural corridors. One of them – the Cobaw Campaspe Biolink Project – involves Woodend, Ashbourne, Carlsruhe and Newham Landcare Groups.
A desktop study of the biolink area is currently being undertaken and workshops in the field are planned. Open to landowners, Landcare members and interested stakeholders, the workshops will include walk and talk events with ecologists and indigenous owners looking at issues such as threatened species, river and grassland restoration and remnant vegetation management. We will keep you notified as plans progress. 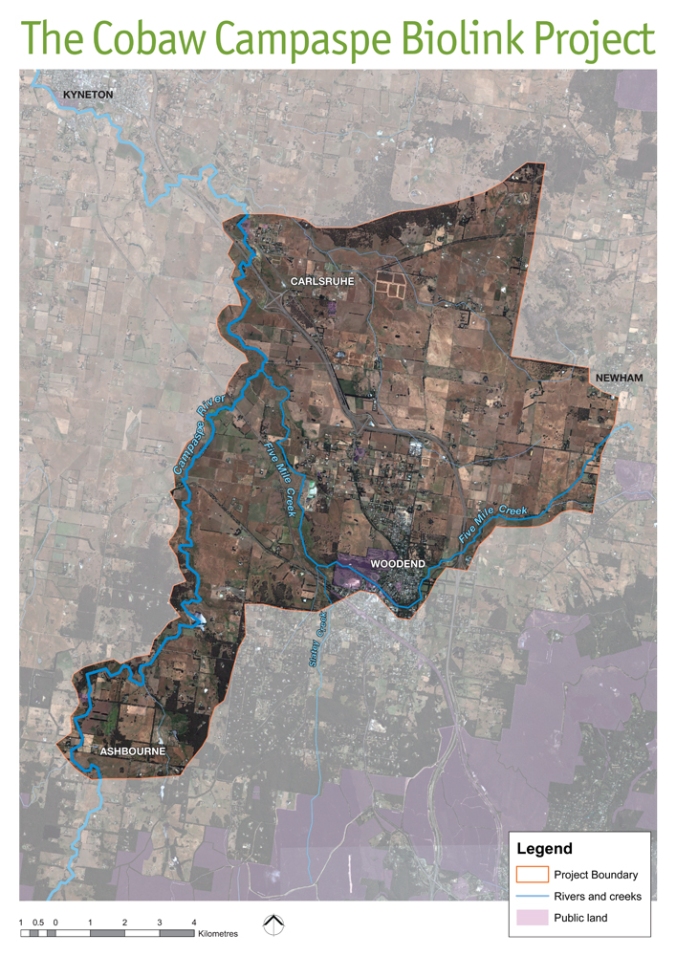 This map shows the approximate area of the Cobaw Campaspe Biolink Project.

Many of you will be aware that the Council’s draft environmental strategy is currently open for comment. We encourage everyone to check out strategy and provide comment to council. The strategy is available for downloading and comment by clicking here. Ross Colliver has done a great summary of the strategy for Riddells Creek Landcare at http://nutsaboutnaturercl.blogspot.com.au/

These newsletters are worth a read if you’re interested in more Landcare news from the region.

Wildflowers of Woodend and Newham